Started in 2009, the Sadhus project is a long-term work: three journeys were necessary to achieve this portrait gallery of Hindus wandering monks. In Hindi, the word sadhu literally means holy man. These ascetics aspire to spiritual enlightenment by detaching themself from the material world. Their number is estimated at over 5 million in India.

The specificity of my approach is to differentiate itself from the scenic representation usually made of these men. I photograph them at the place we meet, with a locally handmade photographic background. Through this process, I wish to offer the viewer the opportunity to pose a people-centered view, out of established visual codes ...

During these three journeys over 110 Sadhus were photographed and interviewed, hundreds met ... 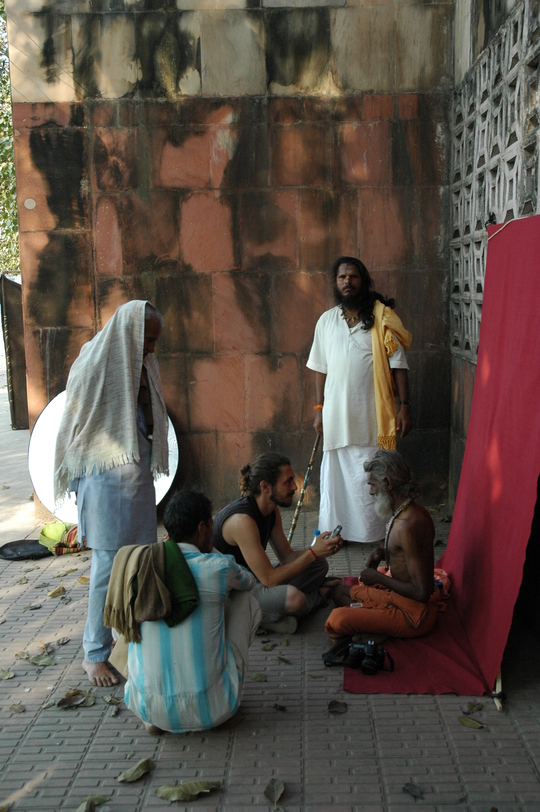 A friendship story is at the origin of this project.

My friend Jean-Charles Ecrement and I started in Varanasi in 2009. We wanted to talk about those men and share a little of this inspiring Indian wisdom through a series of portraits.

The approach is meant to be the sincerest possible and images of the project are the result of real encounters... 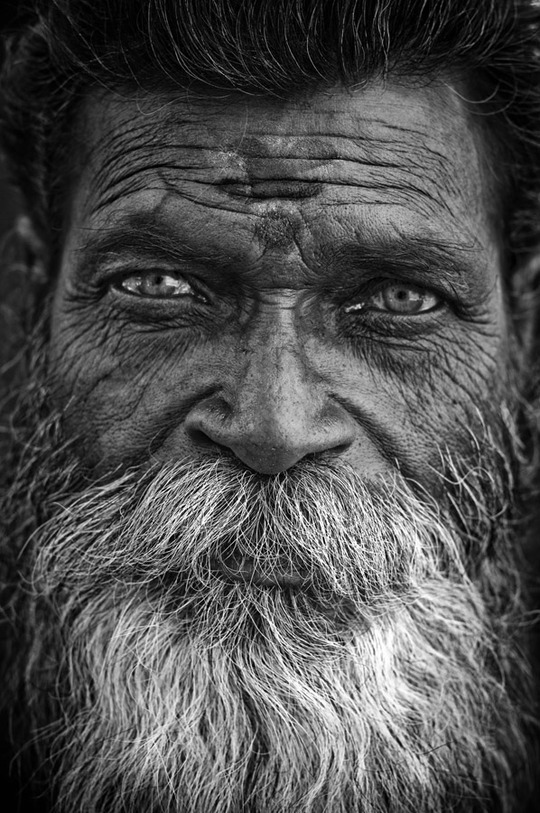 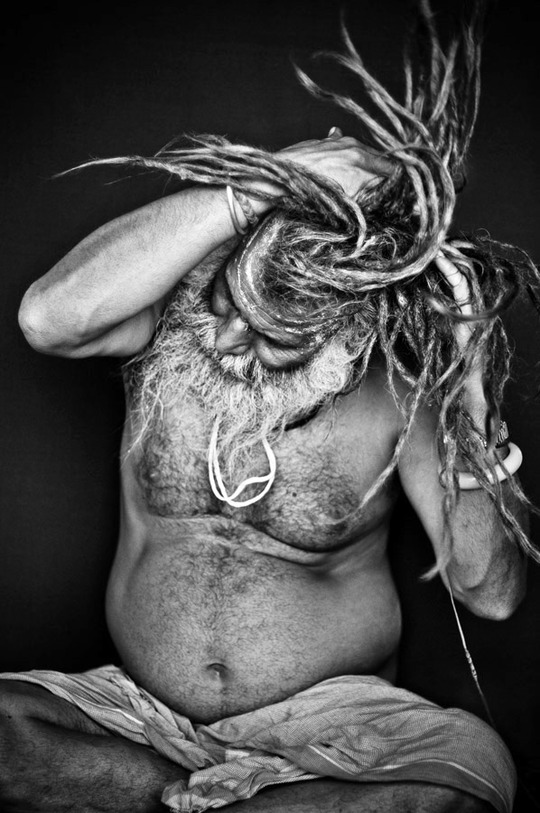 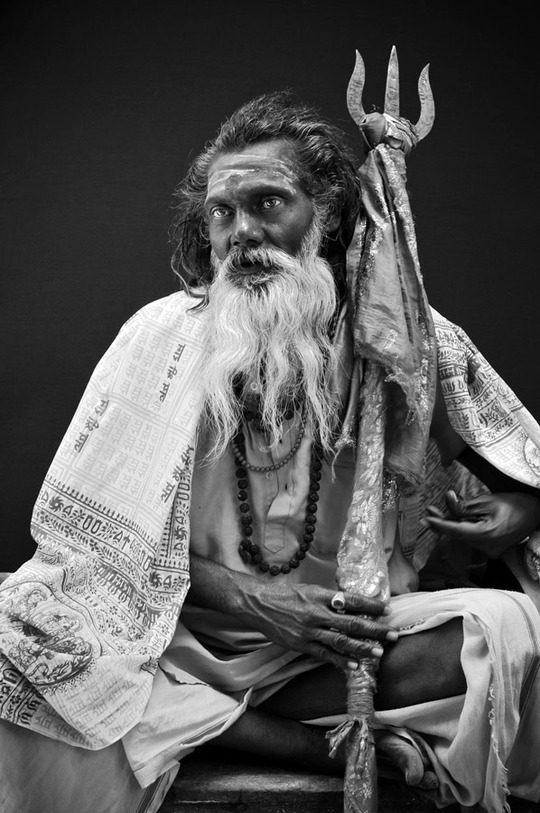 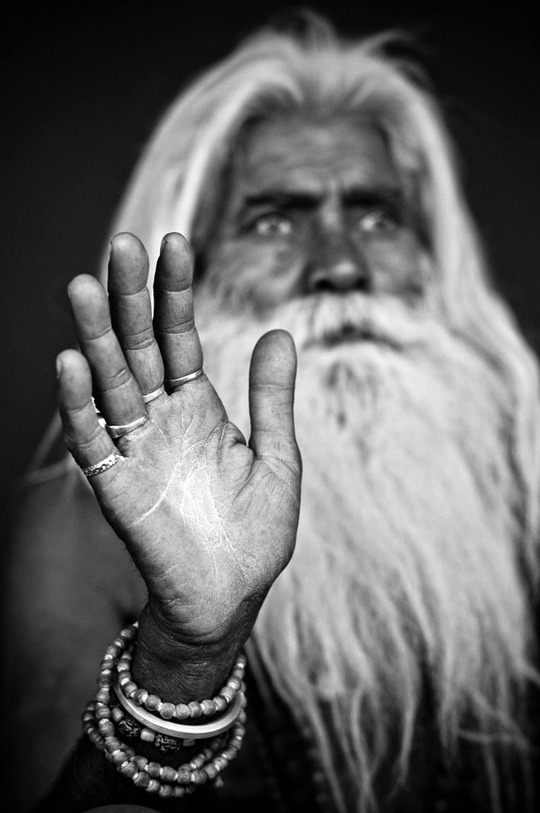 After that first trip we have designed the first layout of the "Sadhus of Benares" book.

The book was awarded the "Grand Prize Winner" at the Best Blurb Book Contest. 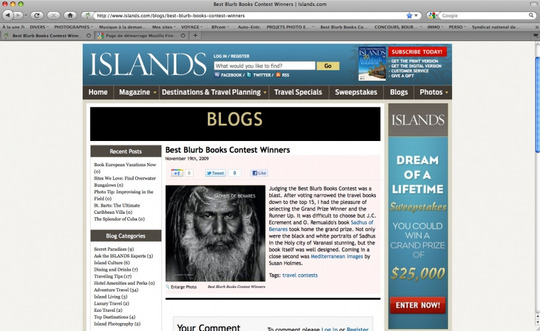 We were supposed to keep on the project together but I continued without Jean-Charles at Haridwar in 2010.

The day before we meet at Delhi airport, I learned by telephone that an event forced him to stay in France. With his his consent, I continued the project thanks to another friend, René Garbarino, who came to help.

We spent three weeks at the Maha Khumb Mella; at the heart of what is the largest religious gathering in the world. 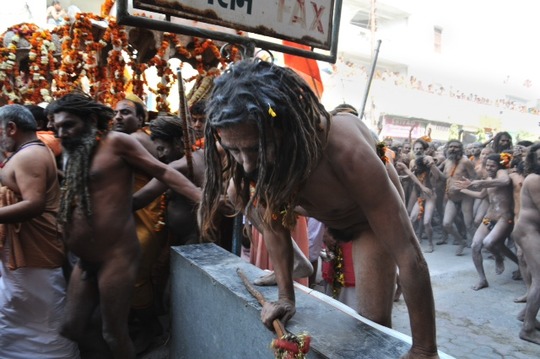 Incredibly, we meet on the first shooting day Dharam Puri Maharaj, the Naga sadhu who made the cover of the first book! Among millions of pilgrims present on that day we meet him, but this kind of small miracles happens in India.

These 3 weeks will be extremely prolific in terms of pictures and I learned so much from meetings and  interviews. The craft background now manages us to take portraits of standing Sadhus. 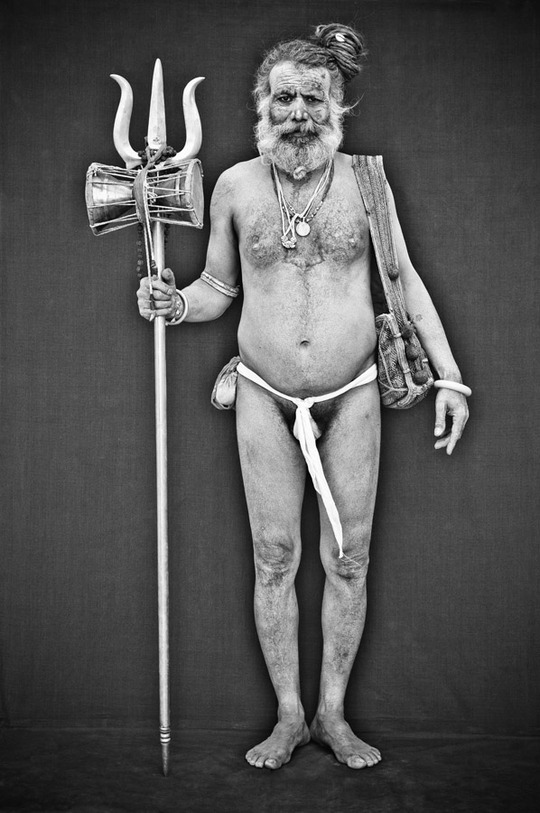 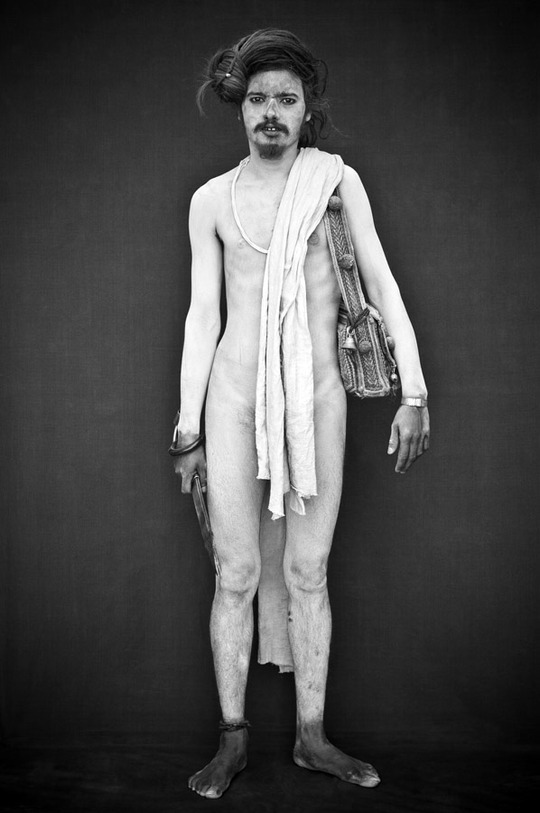 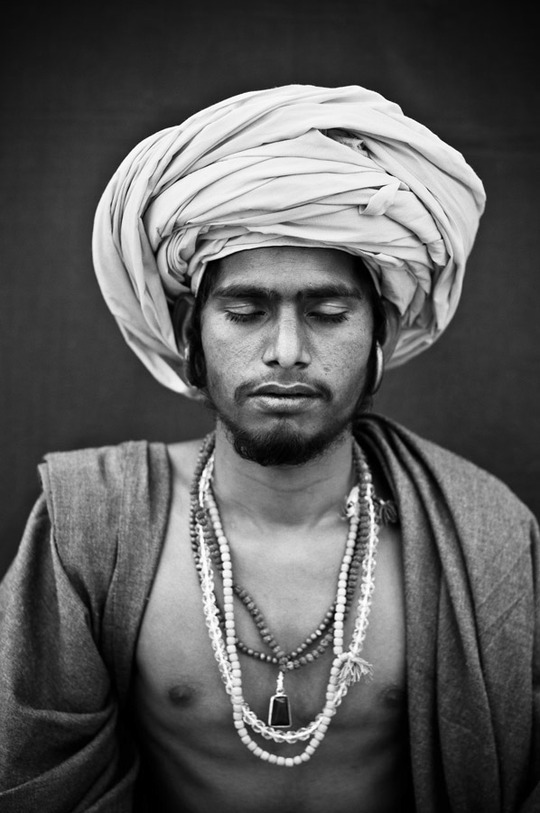 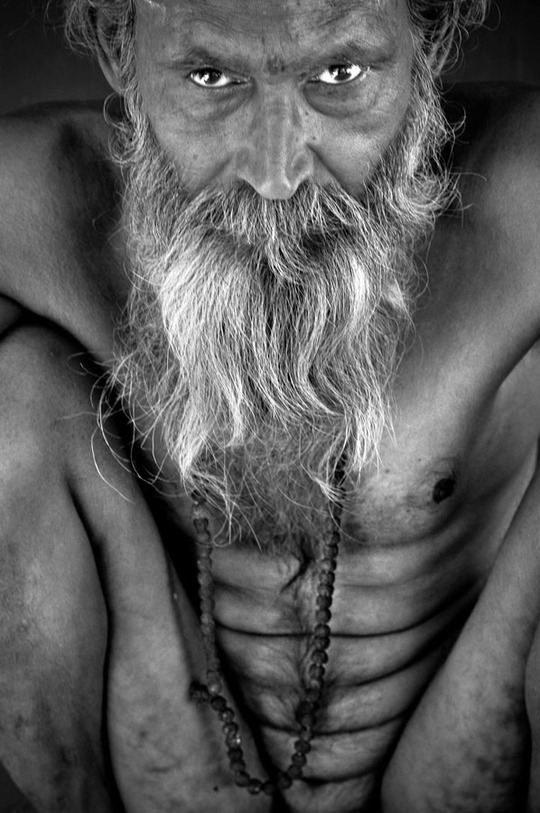 After this second journey took place the first exhibition of the Sadhus project within the framework of the  12th Sept'Off in Nice (France), Festival of Mediterranean photography.

The exhibition is awarded the Lucien Clergue award (1st prize of the Festival). 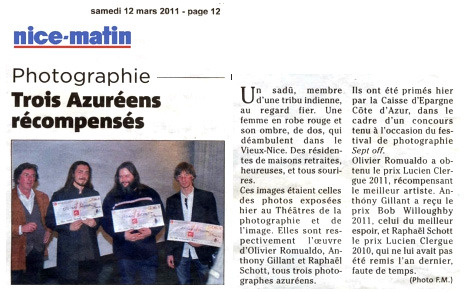 the saga is continuing in 2001 in Maharashtra, mainly in Omkareshwar, a sacred island on the Narmada River. Concerned with being as accurate as possible in this iconographic work, I took interrest in photographing families of Sadhus that are missing in the project as well in Sadhvis, the women Sadhus. 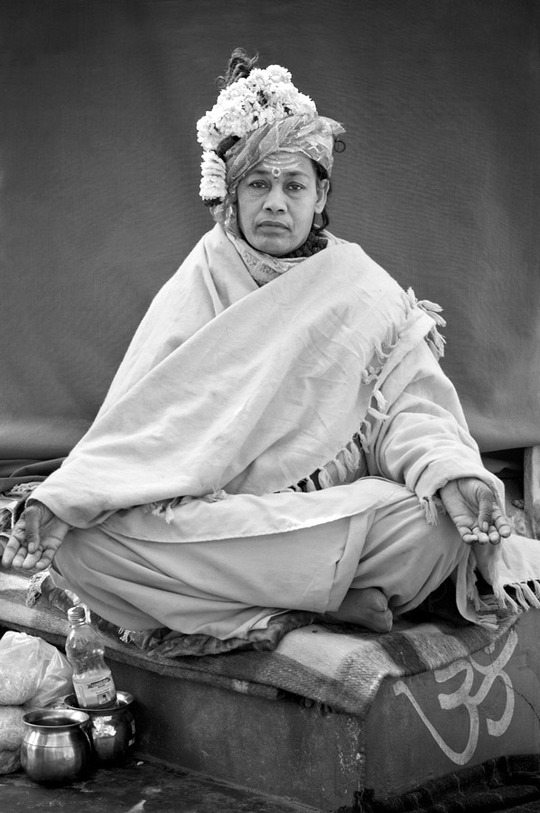 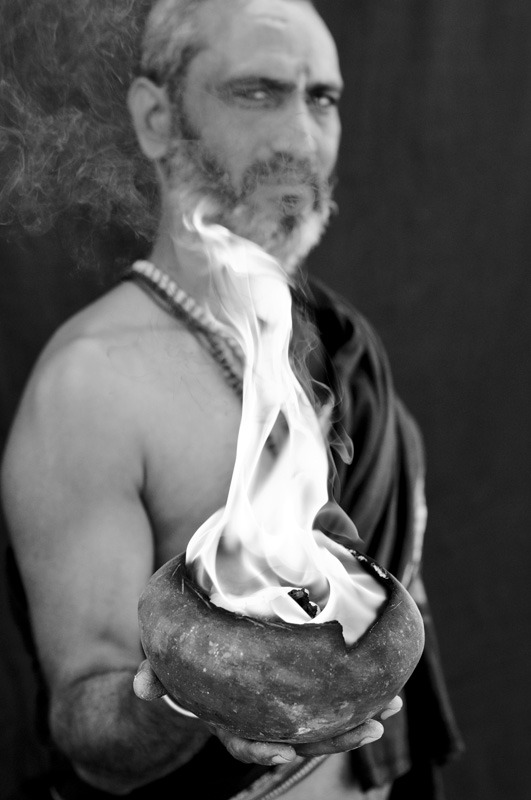 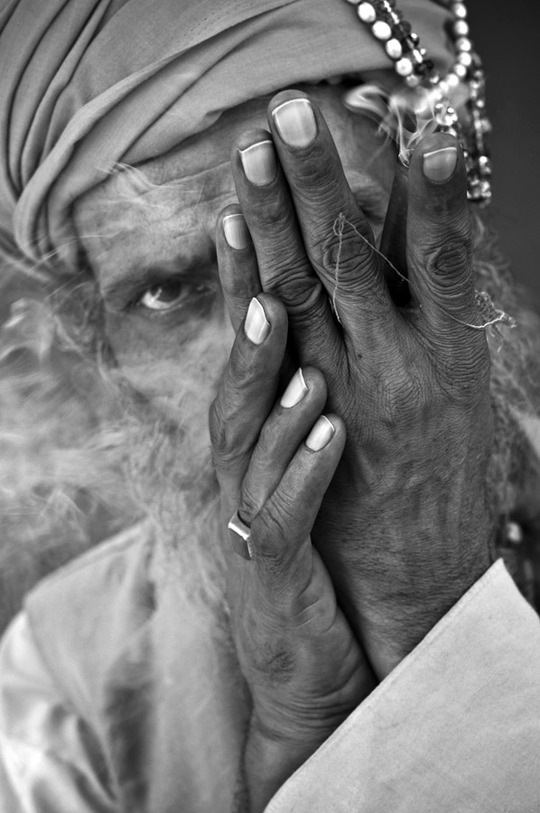 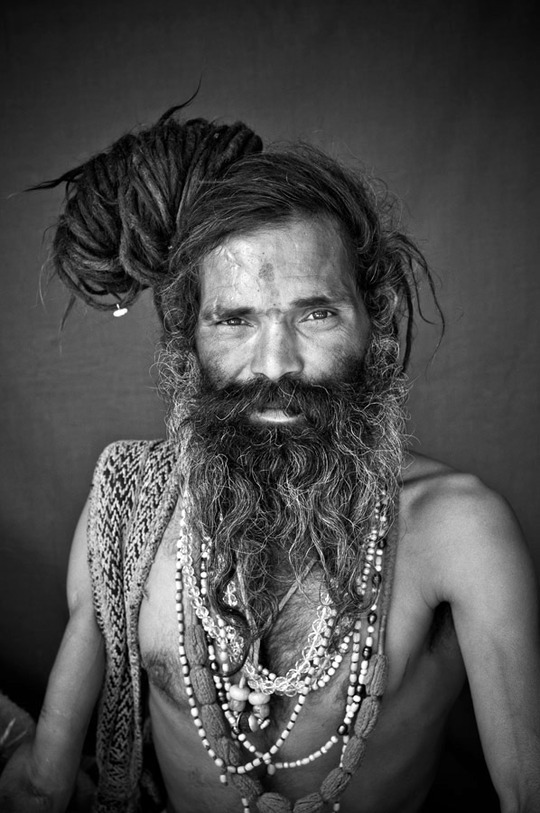 It is in Rishikesh, after Haridwar Kumbh Mella, that I meet Ananda Baba. This lettered Sadhus is a swami that lived an extraordinary life. He traveled a lot (United States, Europe, Australia, ...) before making his vows and to renounce to the world. In Hindi Ananda means bliss and this can be read on his face. This meeting is so magical that I spend the whole day with him. Then I returned to Delhi in the evening of that day. He left the day after for a walking pilgrimage to the sources of the Ganges.

It is a journey on foot and alone to the sources of the Ganges that this meeting has inspired me ...

One year later, it is from our meeting place that I undertake the same adventure. My motivation is twofold: to go further in my knowledge about Sadhus by traveling their traditional way but also , as a personal challenge because I think we limit ourselves in what we can achieve ...

I'll walk more than 600km and up to 4500m high. Rallying the three sources of Ganges: Badrinath, Kedarnath and Gangotri. Some nights will be spent under the stars, others in ashrams or in dharamsallahs who welcome pilgrims.

The journey was wonderful and gave birth to another series of photographs: Yatra - 2011. 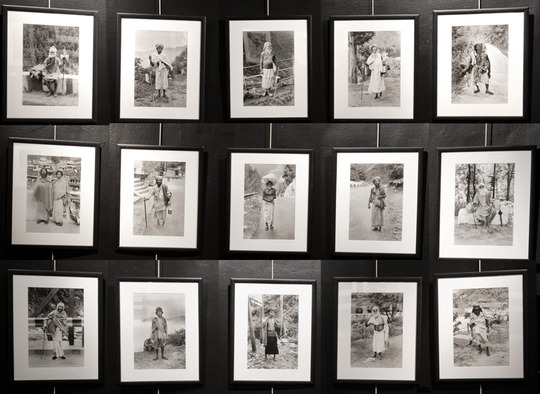 In March 2012, I am invited to exhibit at the Espace Pierre Cardin in Paris. The Sadhus and "Yatra" series are on the Champs Elysees! I also exhibited at the Trans'art Festival in Cogolin and at the Mougins Museum of Photography in early 2013. 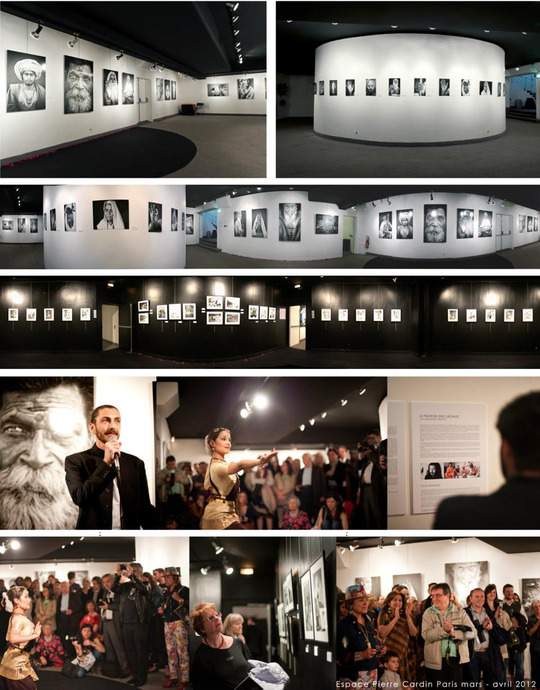 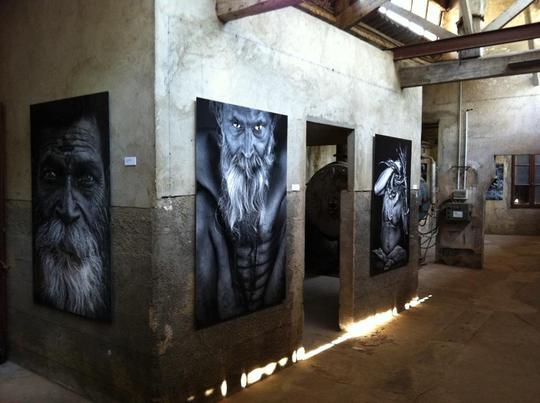 From the beginning of the project I attach myself to choose unexpected places of exhibition or on shift  with the topic to surprise the audience. This is how I started to launch my "Street Exhibition" concepts in Perpignan (Visa pour l'Image), Paris (Paris Photo) and even in Berlin... 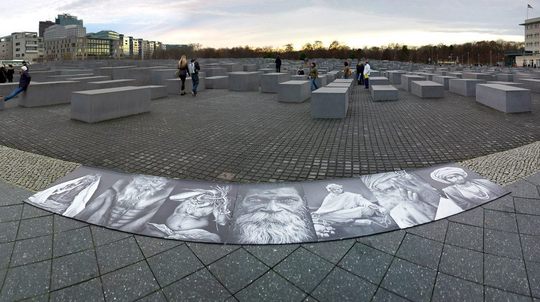 Traditional ways for publishing are complicated for little well known photographers. So, I decided to launch the self publishing of this book by relying on my own structure and an association.

While realizing these portraits of wandering Hindu monks, I explained them that we had no sadhus in France. I promise to talk about them in my country through exhibitions as well as a book. 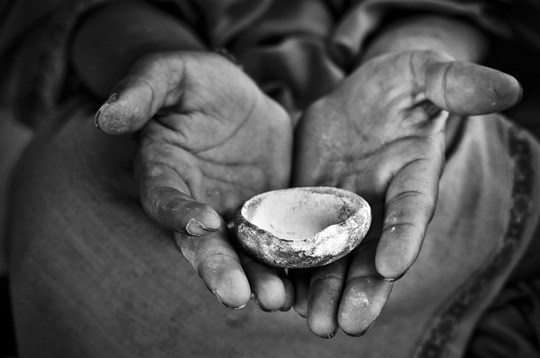